Konongwootong Reservoir, north of Coleraine, is recognised for its indigenous heritage and is a popular site for fishing, walking, bird watching and passive recreation. 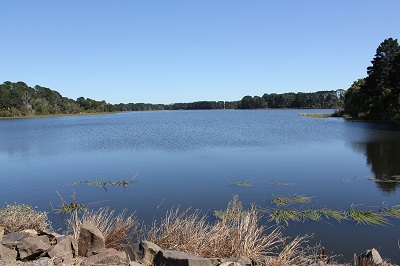 The reservoir is suitable for electric power boats, canoes and kayaks.
Boats with petrol combustion engines, water-skiing, motorcycling and camping are NOT permitted.
Please help us to maintain this site for future generations by respecting the rules and taking any rubbish home with you.

The reservoir has a storage capacity of 1920 megalitres and is supplied by three spring-fed streams running across grazing land in a catchment area that spans about 11 square kilometres.

It was built in 1926 to supply water to the townships of Casterton and Coleraine.  More recently, the towns have been connected to the Tullich aquifer, further to the west, but the reservoir still acts as a back-up supply as well as a supply for rural customers along transfer pipelines.

A master plan for the reservoir and adjoining land was approved in 2012, addressing future uses, upgrades and management guidelines.

For many thousands of years, through to the late 1830s, the site was a natural wetland with pools of water in winter, and springs and water soaks in summer. The wetland provided foods, water, fibres, medicine and shelter for the Konongwootong Gunditj people. Families flourished, culture was strong.

European settlers arrived, determined to establish large sheep holdings across the region. They were intent on removing the Gunditj from the area.

In March 1840, settlers carrying firearms followed Gunditj warriors to the Fighting Hills area near Casterton, seeking retribution for the theft of a flock of sheep. It was a one-sided fight with an estimated 41 Gunditj men and boys killed, and just one settler wounded by an Aboriginal spear.

A month later, Konongwootong was the site of the Fighting Waterholes Massacre as the settlers attempted to completely eliminate the Gunditj presence from the area. The natural amphitheatre acted as a trap, with an estimated 30 men, women and children surrounded and murdered. The location of their burial is unknown, although heavy flows from a flood in 1946 unearthed human remains. They were gathered up by Mr T.J. Fitzgerald of Coleraine and buried respectfully.

Gunditjmara history indicates that some members of the clan managed to escape and made their way south. 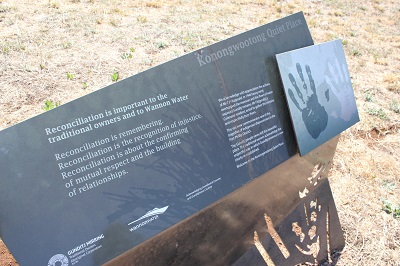 Wannon Water established a Quiet Place at the reservoir in 2014 to recognise the traditional history of the area. Designed to encourage informed and respectful contemplation by visitors, the landscaped area features a walking path, interpretative signage and three stone benches at the top of a natural amphitheatre with a view over a small wetlands area.

The project was a collaboration between Gunditj Mirring Traditional Owners Aboriginal Corporation elders and staff, Gunditjmara Nation elders, the Department of Sustainability and Environment and Wannon Water.

The work was funded through the Victorian Government's Recreational Fishing Grants Program, has included: 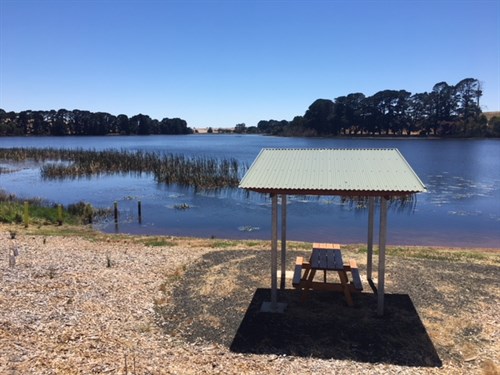 Historically, Konongwootong has been an important fishing location. As a spring-fed water resource, it is more immune to the impact of drought than many other local waterways.

In a letter to The Argus newspaper in July 1932, the president of the Coleraine Angling Society, Mr W.C. Walters, explained how rainbow trout fry were first released into the reservoir in September 1927.

It was decided that no fishing would be allowed for three years, but the growth of the fish was so apparent that angling was permitted on the opening of the season on September 1, 1929.

In January, 1930, a trout weighing 9lb. 12oz. was caught. This fish was two and a half years old, and is claimed as a world's record. The fish was blocked in ice and sent to London, where its age was proved, and now it is in the British Museum.

The top weight of trout caught up to the close of last season was 10lb. 3oz., a fish landed in January, 1931. The remarkable growth of these fish is attributed to the presence of an unlimited food supply of minnows and vegetable matter.

Further evidence regarding size was furnished by members of the Ballarat Acclimatisation Society, who, when stripping trout in November 1931, netted a trout which turned the scale at 13lb.

Konongwootong Reservoir is a natural catchment not fed by any streams, and there is positively no doubt that the fish caught are those which were liberated as fry in 1927.

The reservoir hosted the Victorian Fly Fishing Championships on numerous occasions and was cited as one of Victoria’s top trout fisheries during the 1940s and 1950s.

As a permanent body of water, the Konongwootong Reservoir provides important habitat for many species of migratory birds.

The site has been identified as providing potential habitat for the critically endangered Golden Sun Moth (Synemon plana), although recent surveys conducted at the reservoir have not recorded the species at the site.

The site also contains some remnant grasses and other indigenous species. There are examples of the rough-barked Manna Gum or White Gum (Eucalyptus viminalis) and Australian Blackwood (Acacia melanoxylon).

The area is dominated by stands of mature Pine trees (Pinus radiata), most of which were planted during the 1920s.

How to get there?

Konongwootong Reservoir is located 11 kilometres north of Coleraine via the Edenhope-Coleraine Road. Click here for a map.